Arizona, Montana, New Jersey, and South Dakota have legalized marijuana for adults 21 and older, as voters in each state approved their respective ballot initiatives at the ballot box. South Dakota also passed a medical marijuana initiative and became the first state in American history to enact both policies on the same day.

Arizona — After legalization suffered a narrow loss at the ballot box in 2016, a renewed attempt to end marijuana prohibition in Arizona is underway. The 2020 initiative (Prop 207), spearheaded by Smart and Safe Arizona, received official qualification for the November ballot on August 10.

Arkansas — In 2016, Arkansas approved a medical marijuana law through a voter referendum. This year, activists are working to pass adult-use legalization initiatives. Though the COVID-19 pandemic has significantly slowed efforts, Arkansans for Cannabis Reform continues to collect signatures for an initiative to regulate and tax marijuana, as well as a separate measure that would expunge marijuana offenses from individuals’ records and end ongoing sentences.

In late May, a federal judge ruled that the secretary of state must accept signatures that were not collected in-person or notarized, as is required by existing policy, due to the difficulties campaigns face amid the ongoing health crisis. The campaign must submit around 90,000 valid signatures from registered voters by July 3 to make the November ballot.

Florida — Unfortunately, a hard-fought attempt to put legalization on the ballot came up short this year. Make it Legal Florida announced in January that it was discontinuing efforts to gather the 766,200 signatures needed to qualify. The task was made significantly more challenging by a 2019 election law approved by state lawmakers.

Idaho — Due to public health concerns related to the COVID-19 pandemic, activists with the Idaho Cannabis Coalition suspended their campaign to put a medical marijuana initiative on the ballot this year in early April. The group vowed to continue its effort with the goal of qualifying in time for the 2022 election.

However, a late-June federal court ruling on a separate Idaho ballot campaign determined that the state must make accommodations due to signature gathering complications related to the pandemic. Based on this ruling, Idaho medical marijuana advocates are now exploring their options with the goal of still qualifying for the November 2020 ballot.

Mississippi — Mississippians will have an opportunity to vote on two medical marijuana ballot initiatives this November. After gathering well over the required number of signatures, Mississippians for Compassionate Care succeeded in qualifying a medical marijuana initiative, Initiative 65. And in March, state lawmakers voted to put a competing measure — which puts greater regulatory control in the hands of the state legislature — on the ballot, too.

Missouri — Unfortunately, Missourians for a New Approach, a campaign that began building support for an adult-use legalization voter initiative in early 2020, was forced to cease signature gathering efforts due to the COVID-19 pandemic and public health directives against social interaction.

Montana — In January, the newly formed New Approach Montana campaign filed two ballot initiatives for state review. One, a constitutional amendment requiring roughly 50,000 signatures to qualify, would allow lawmakers to establish a legal age for marijuana consumption. The other, a statutory measure that requires about half as many signatures, would establish a system to regulate and tax marijuana for adults’ use. Despite signature gathering challenges caused by COVID-19, the group submitted more than 130,000 signatures on June 19 to qualify the pair of legalization initiatives for the November ballot. The campaign received official word on August 13 that both measures qualified for the November ballot. 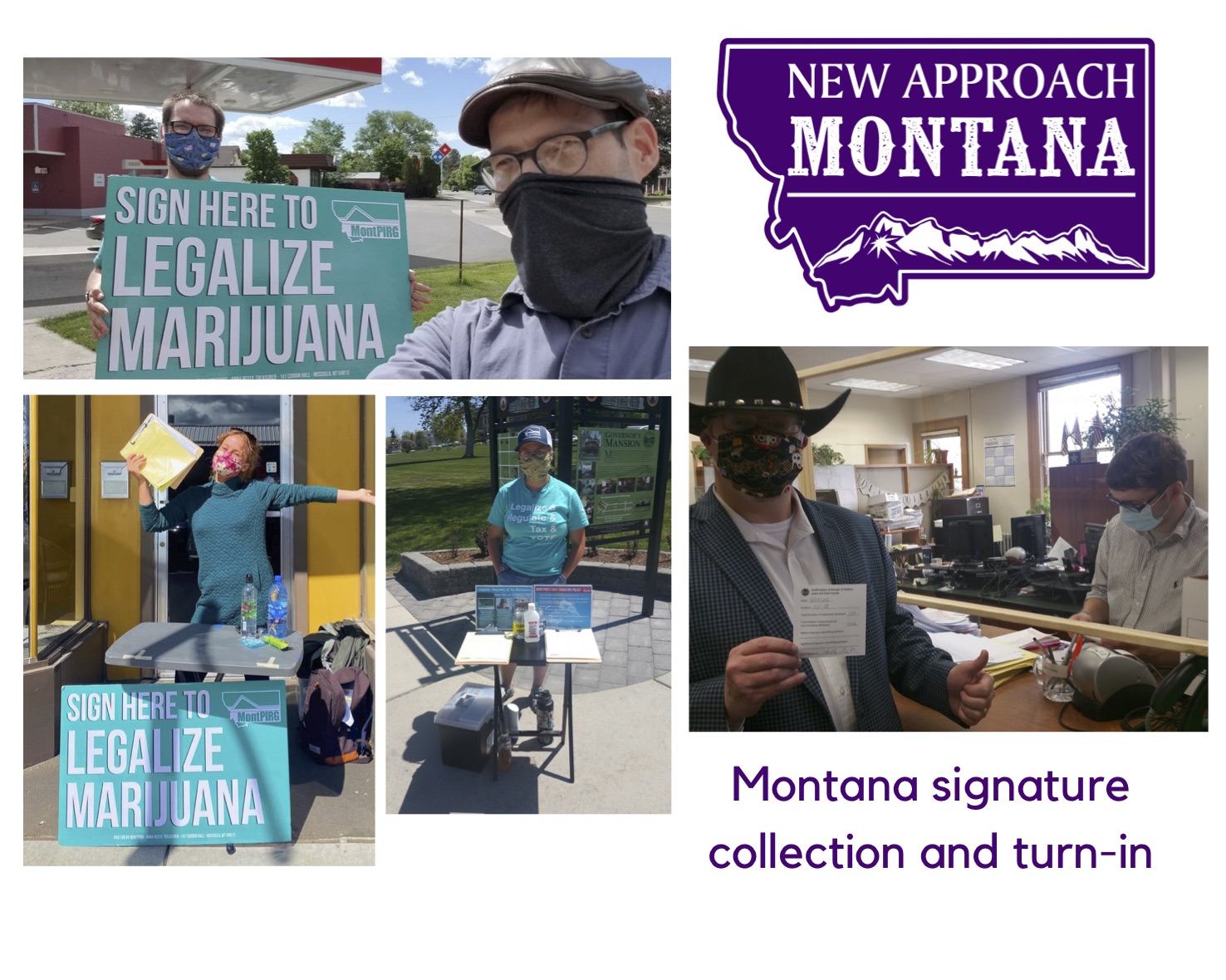 Nebraska — After years of inaction by lawmakers, policymakers and patient advocates formed Nebraskans for Medical Marijuana. On July 2, the campaign submitted over 190,000 signatures gathered from all 93 counties in the state in support of its ballot initiative to establish legal protections for medical marijuana patients with serious health conditions. In late August, Nebraska Secretary of State Bob Evnen informed the campaign that it had succeeded in collecting enough signatures to certify the measure for the November ballot. He also dismissed opponents’ last minute request to not certify the initiative, but in another desperate attempt to deny Nebraskans their constitutional right to vote on citizen-initiated ballot measures, opponents filed a lawsuit to strip medical marijuana from the ballot, arguing that the measure violated the state’s single subject rules. Sadly, on September 10, the Nebraska Supreme Court ruled that the initiative will not appear on the November 2020 ballot. 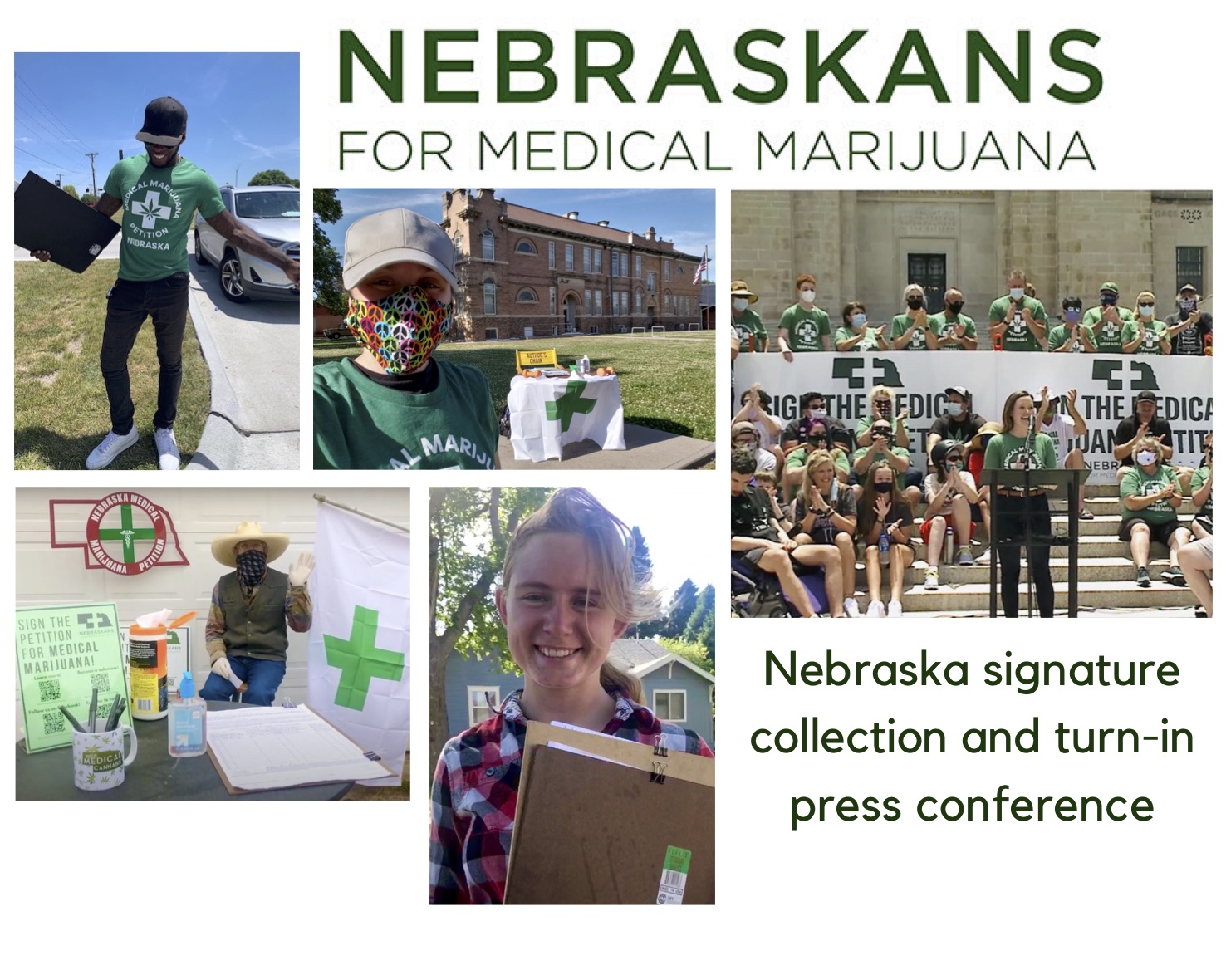 New Jersey — Unlike most other marijuana policy ballot initiatives, which qualify through signature drives, New Jersey will vote on legalization later this year thanks to a legislative referral. After failing to find enough common ground to pass a bill in 2019, lawmakers opted to put a proposal before the voters.

North Dakota — Activists leading Legalize ND’s 2020 ballot initiative effort announced that it is unlikely they will be able to gather enough signatures to qualify this year as a result of public health concerns related to COVID-19. The campaign will continue its efforts to get the initiative on the state’s 2022 ballot.

Oklahoma — An initiative to regulate and tax marijuana similarly to alcohol was filed with the Secretary of State’s office late last year, but efforts to qualify the initiative for the ballot were ended due to public health risks caused by COVID-19.