How do laws against driving under the influence of marijuana work?

Thirty-three states have “effects-based” driving under the influence of marijuana laws that criminalize a person for driving while they are truly impaired, which is determined based on all available evidence. That may include footage or testimony about how the person drove, the results of a 12-step analysis by a drug recognition expert, whether the person smelled of marijuana, and the results of a blood test for THC — the main psychoactive ingredient in marijuana.

Seventeen states, however, have enacted “per se,” “zero tolerance,” or “rebuttable presumption” laws, which criminalize drivers for having either any THC or metabolites in their blood or for having a set amount. Yet, as the AAA Foundation for Traffic Safety concluded, per se laws are “arbitrary and unsupported by science.”1

What is the threshold of THC at which a driver is impaired by marijuana?

There is no magic number.

The AAA Foundation for Traffic Safety evaluated data on THC-positive drivers and drug-free controls, along with the results of drug recognition expert evaluations, to see if the data supported a set threshold for a per se driving law for cannabis. It did not.2 As AAA Director of Traffic Safety Advocacy and Research Jake Nelson explained, “There is no concentration of [THC] that allows us to reliably predict that someone is impaired behind the wheel in the way that we can with alcohol.”3

Some states have adopted a limit of five nanograms per milliliter (ng/mL) in whole blood. The AAA analysis indicates that such a limit misses 70% of cannabis-impaired drivers, who test at a lower level.4 Meanwhile, it noted a lower limit would ensnare sober drivers who had used marijuana much earlier and potentially some people who had been exposed to second-hand marijuana smoke. The foundation flagged another problem with a per se approach: a “cannabis user has no meaningful way of knowing what their blood THC concentration is either at the time of a driving event, such as an offense or crash, or predicting what it might be at the time of sampling, so can’t make an informed and responsible decision about whether to drive based on their concentration.”

How long does it take for the psychoactive effects of marijuana to wear off?

Because smoked THC is rapidly transferred into the blood stream, THC levels in the blood rise quickly immediately after inhalation. Depending on the dose, THC typically reaches peak concentrations of more than 100 ng/mL five to 10 minutes after inhalation and then rapidly decreases to between one and four ng/mL within three to four hours.

However, heavy marijuana users’ blood can contain detectable amounts of THC even after periods of abstention. In one controlled study, six of 25 participants tested positive for active levels of THC after a full seven days of abstention, with the highest concentration detected being three ng/ml of whole blood.5 In addition, the blood serum of heavy to moderate users may contain more than two ng/mL of THC at 24 or even 48 hours after smoking a single joint, a level that studies have shown does not produce impairment.6

The graphic below shows the mean plasma levels of THC and its metabolites (11-OH- THC and THCCOOH) for six subjects smoking a marijuana cigarette containing 34 mg of THC, following several days of abstinence (which would reflect an occasional user's pattern of usage).8 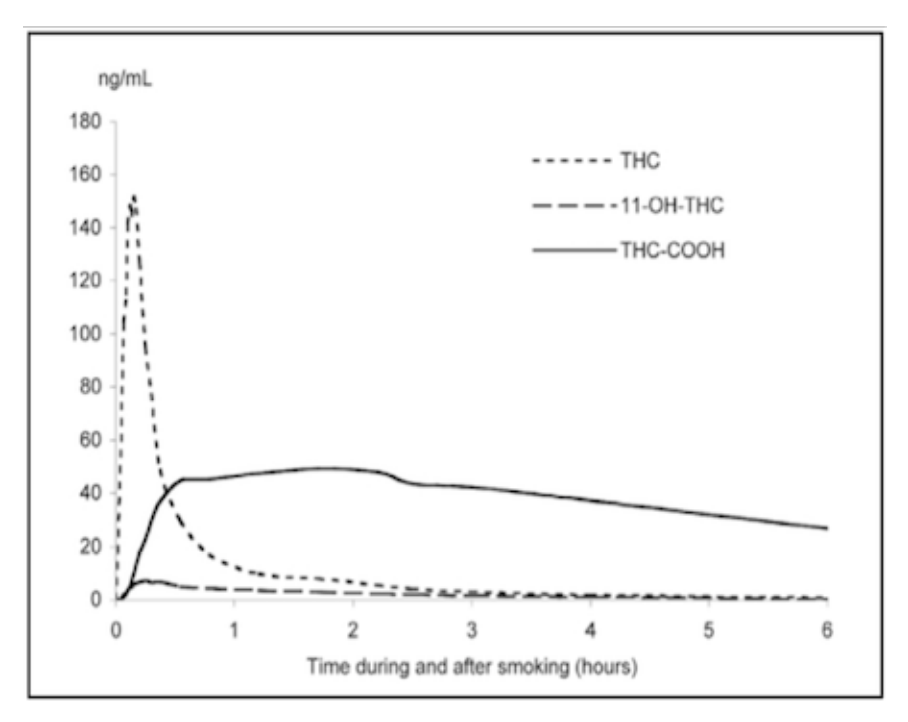 Does this mean that some DUID laws criminalize sober drivers?

Yes, if they set a per se limit or zero tolerance standard for THC. Furthermore, arresting and convicting motorists who only have marijuana metabolites in their systems (from having used marijuana days or weeks before) will certainly cause people who are completely sober to be arrested and wrongly convicted of driving under the influence of drugs.

Even if they’re imprecise, do per se or zero tolerance laws keep road users safer?

No. In addition to the approach being unscientific, research has shown that per se DUID laws do not make the roads safer. As implemented, these laws have “no discernible impact on traffic fatalities.”

Meanwhile, research by the National Highway Traffic Safety Administration found no causal relationship between having detectable THC and being involved in crashes.9 The NHTSA’s large, case-controlled study found that drivers who tested positive for THC had identical crash risk as those testing negative for cannabis once researchers controlled for demographics and use of alcohol.10 (In comparison, drivers with a 0.05 blood alcohol content — which is below the legal limit — had more than double the crash risk.)

What approach does MPP recommend?

MPP recommends the policy most states already take, which is similar to most state laws on driving under the influence of medications: an effects-based law. This makes it illegal to drive while impaired by cannabis or THC and determines that based on a review of all the relevant evidence, including but not limited to any blood test for THC.

A driver who fails a roadside sobriety test should be required to submit to a blood test by a trained medical professional — or risk criminal and administrative sanctions.

Is there anything states can do to better address the issue?

It is prudent to include warnings on edible products that are infused with cannabis, advising how long the effects may take to wear off. Also, the AAA Foundation for Traffic Safety study suggested, “cannabis users could be counseled through public education campaigns to observe a time-based restriction on their driving of perhaps four to six hours following smoking, or six to eight hours following oral ingestion.”

Another wise step is investing in training for more officers in detecting impairment using field sobriety tests, along with certifying more officers as drug recognitions experts. This can prove helpful to better detect drivers impaired by prescription medications — some of which have very high crash ratios.

2 Barry Logan, Ph.D., et al., “An evaluation of data from drivers arrested for driving under the influence in relation to per se limits for cannabis,” AAA Foundation for Traffic Safety, May 2016.

10 Id. Regarding the adjustment for demographics: “If the THC-positive drivers were predominantly young males, their apparent crash risk may have been related to age and gender rather than use of THC.”