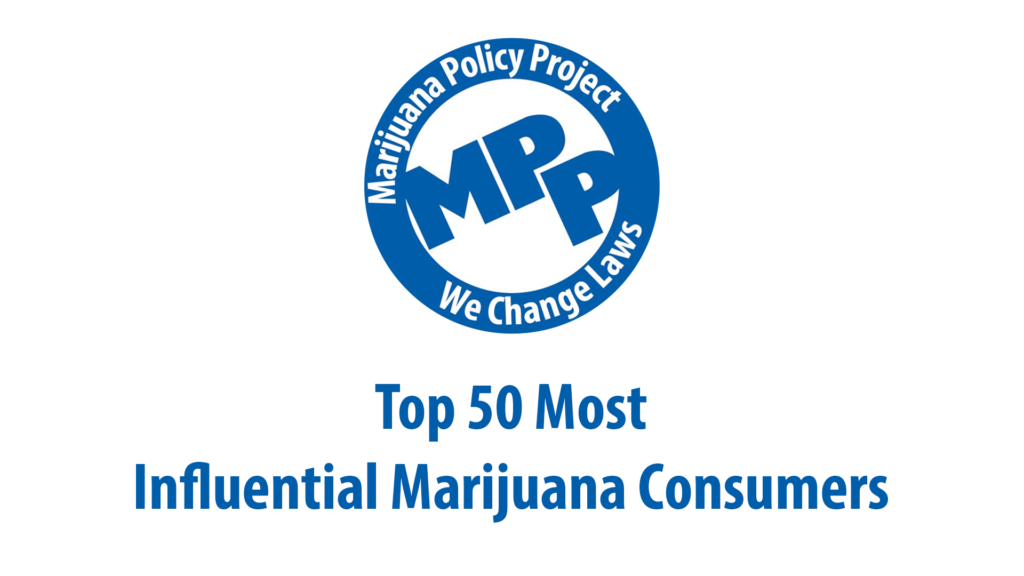 The Marijuana Policy Project's list of the Top 50 Most Influential Marijuana Consumers is intended to identify individuals who have used marijuana and achieved high levels of success or influence. It was created using the criteria employed by Out Magazine to produce its "Power 50" list of LGBT Americans, including “power to influence cultural and social attitudes, political clout, individual wealth, and a person’s media profile.”

To qualify for MPP’s list, individuals must (1) be alive, (2) be a U.S. citizen, and (3) have consumed marijuana at least once in their life according to either their own account or that of a legitimate source. They do not need to currently consume marijuana or support marijuana policy reform.

This list was assembled and selected from a non-partisan position; placement on this list does not indicate endorsement or support from MPP or MPP Foundation.

"I smoked marijuana twice — didn’t quite work for me. It’s not my thing, but it is the thing of a whole lot of people."

"the first time in a year and a half that I had a decent night’s sleep because the arthritis pain was gone..."

Cruz spokesperson: "When [Cruz] was a teenager, he foolishly experimented with marijuana. It was a mistake, and he’s never tried it since."

"When I was a kid, I inhaled. Frequently. That was the point."

"First, [in high school], I smoked a lot of pot...and that’s how I got to know the people ‘half in’ the society of my high school and we waved at each other over the bong. Then I got to know people by making jokes."

"Uh … 1982. I hear it's gotten better." [In response to a question about when she last consumed marijuana.]

"When I was in England, I experimented with marijuana a time or two."

"He said he had tried marijuana, enjoyed it, 'but it did not become a habit and I have not tasted it in many years.'"

"As for drugs – well, Gates was certainly not unusual there. Marijuana was the pharmaceutical of choice…"

Source: Gates: How Microsoft's Mogul Reinvented an Industry -- and Made Himself the Richest Man in America

"Do you know how many movies I wrote when I was high?"

"As I've already been open about in the past — and as I assume many would expect — I made personal choices when I was younger that I neither support nor condone for others and certainly wouldn't encourage through public policy."

"Only when I’m in the states where it’s legal."

"Let’s just say I wasn’t a choir boy when I was in college and that I can recognize that kids make mistakes, and I can say that I made mistakes when I was a kid." [In response to a question about whether he ever consumed marijuana. Also, one of his college friends said, "Randy smoked pot."]

"Admitted to Playboy in 1993 that he smoked marijuana twice, inhaled, but didn’t like it."

"I smoked some weed, and that’s how I finished 'Izzo.'"

"The answer is a resounding yes." [When asked if he smokes as much weed as he implies on the show.]

"James also revealed he and his teammates smoked marijuana one night after getting access to a hotel room in Akron."

"He prefers to say that he's "medicating" or "taking my medicine" or, most often, using or consuming cannabis."

"This medical marijuana has been a godsend. It relieves me of the pain — or thinking about it, anyway."

"At one of the gubernatorial debates, Baker said he had smoked marijuana in the past."

"Our culture is progressive about a lot of things, but in some corners, marijuana is still vilified and misunderstood. I believe that marijuana, which many experts agree is less addictive and less prone to overdose than pain meds like OxyContin​, must be an integral part of the conversation about how we treat pain in our everyday lives."

"I use it to control the nausea which comes with the headaches."

"I did experiment with marijuana when I was a youth."

"I think that marijuana should not only be legal, I think it should be a cottage industry. It would be wonderful for the state of Maine. There’s some pretty good homegrown dope. I’m sure it would be even better if you could grow it with fertilizers and have greenhouses. . . ."

I recently thought, "Oh, I’m going to start smoking pot again to cure insomnia. I’d put the kids to bed, go upstairs and smoke a bit of pot. But then I’d get stuck in front of the Kardashians on TV for 45 minutes. And it freaked me out. I was like, 'I’m never doing this ever again. It’s definitely not for me.'"

"We all need weed sometimes."

"We went to Disneyland. We ate pot brownies. It was literally heaven," Garfield said, winning the award for best birthday celebration ever. "How about Space Mountain three times in a row?"

"I wouldn't answer the marijuana questions. You know why? Because I don't want some little kid doing what I tried."

"The vape pen has changed my life. No, I’m not exaggerating. In fact, her name is Sippy. Yes, she’s a she. And yes, I named her Sippy because I take tiny, little sips — sassy sips, even — from her. And with each sip comes relief — from pressure, pain, stress, discomfort."

"The last time I was like, in a cloud of it? That's how people spoke."

"The only thing pot does for me is it gets me to stop thinking. Sometimes I have a brain that needs to be turned off. Some people are just better high."

"Yeah." [In response to "So you actually smoked 'the chronic,' that particular strain?]

"I take a puff and I'm me when I was 17 again in my white gogo boots looking for a job and there's something quite creative and liberating about that."

"From time to time, I would smoke pot. Granted — it's illegal."

"My first wife got me into it many years ago. I have fibromyalgia pain in this arm, and the only thing that offers any relief is marijuana."

"Yes." [In response to the question, "Which of you are ready to admit to having used marijuana in the past?"]

"It makes me feel the way I need to feel."

"I have used cannabis all over the world."

"These days the hard drugs are gone, but he continues to smoke cannabis."

"The next day, Gore told reporters that he had been an 'infrequent and rare' marijuana smoker, nothing more than a few times at Harvard, 'once or twice' while off duty in Vietnam and occasionally as a divinity student and journalist in Nashville."

"We both had long hair. I was a hippy and so was he. We were the only ones. We bonded over pot. He’s still that hippy at heart."

"I think people need to be educated to the fact that marijuana is not a drug."