What is the CARERS Act?

Provides a safe harbor for state medical marijuana laws: This bill will amend the Controlled Substances Act to allow states to set their own policies in regard to medical marijuana. Patients, providers, and businesses that are acting in compliance with state law will no longer be considered in violation of federal law and vulnerable to federal prosecution.

Polls show overwhelming national support for the legalization of medical marijuana. A CBS News poll found that 86% of Americans thought that doctors should be allowed to prescribe marijuana for medical use.[1] Similarly, a recent national poll conducted by Third Way showed that 78% of Americans favor legalization of marijuana for medical use and that a majority of Democrats and Republicans alike support a “safe haven from federal law” for states that have legalized marijuana, even if they do not support legalization of marijuana for recreational use.[2] A national Pew poll showed 57% of Republicans and 59% of Democrats believe that the federal government should not enforce federal marijuana laws in states that have legalized its use.[3]

Reduces barriers to research: Three additional licenses will be granted to organizations to produce marijuana and marijuana-derivatives for federally approved research, breaking a NIDA monopoly that has stunted research. The bill also ends a public health service review protocol, an unnecessary bureaucratic obstacle for researchers, that applies only to marijuana and no other illegal Schedule I or II drugs, including cocaine, heroin, or methamphetamine. Sen. Chuck Grassley (R-IA) has expressed support for expanding research into the medical applications of components of the marijuana plant. 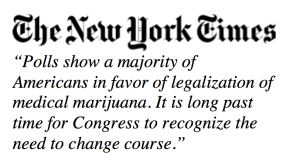 Allows families to obtain and possess cannabidiol (CBD): The CARERS Act would allow individuals to obtain oils and tinctures high in cannabidiol (CBD), a non-psychoactive component of marijuana. “Charlotte’s Web” and other CBD oils have been shown to be a safe and effective treatment for patients — often children — suffering from Dravet Syndrome and other severe seizure disorders.

Overhauls restrictive banking laws: The CARERS Act will change federal law to allow banks to provide financial services to legal marijuana dispensaries working in compliance with state laws. The DOJ and numerous state and local law enforcement officials have called for this reform for years, arguing that requiring businesses to operate on an all-cash basis raises serious public safety concerns.

Allows veterans access to treatment: Currently, VA physicians operating in states with medical marijuana laws are prohibited[4] from recommending or even providing their opinion on medical marijuana as a treatment. The CARERS Act will remove this restriction, fostering an open, honest dialogue that is critical to an effective doctor-patient relationship and, in some cases, allowing veterans access to a viable and effective treatment without being forced to consult a second physician outside their normal healthcare provider.

Reschedules marijuana: This bill will reschedule marijuana from Schedule I to Schedule II under the Controlled Substances Act. This is an insufficient change since it would still leave marijuana in the same category as cocaine, methamphetamines, and OxyContin, but it’s a modest step in the right direction.